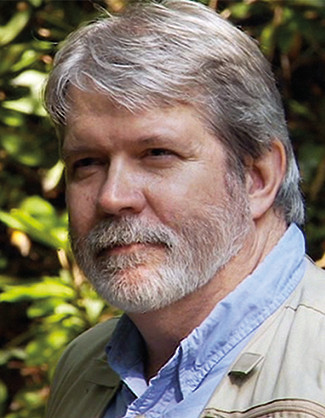 David Arthur Ramsey has been photographing the land and life of the southern Blue Ridge Mountains for more than three decades. His work has been published in local, regional and national publications, most often for the purpose of conservation advocacy. His images have contributed to the vital work of such organizations as the Southern Appalachian Highlands Conservancy, The Conservation Fund, Appalachian Trail Conservancy, Blue Ridge Forever, Southern Conservation Partners, Trout Unlimited, Tennessee Wildlife Resources Agency, Tennessee Dept. of Environment and Conservation, Tennessee State Parks, the U.S. Forest Service and others.

In 2011 David was selected as National Hero of Conservation by Field and Stream Magazine and Toyota Motor Co. for his leadership in the long struggle to preserve the 10,000-acre Rocky Fork Watershed in northeastern Tennessee, which was the largest unprotected tract of its kind in the Appalachian Mountains. In 2012 he was chosen as a Conservationist of the Year finalist by Budweiser and the National Fish and Wildlife Foundation, and in 2018 his photography was chosen for an exhibit at the U.S. Capitol in Washington DC, titled United by the Appalachian Trail, celebrating the 50th anniversary of America's National Scenic Trails Act.

David is a native of Unicoi County, Tennessee where he now resides with his family. His pride in his Southern Appalachian home is reflected in his acclaimed photograph of the Bald Mountains of Unicoi County, which serves as the 8x10 foot image for the entrance to the Voices of the Land exhibit at the East Tennessee History Museum in Knoxville.

David is widely known for his multi-media programs, featuring his captivating photography and stories from the Blue Ridge and Great Smoky Mountains. Contact us via this site to book an appearance for your civic, outdoor, conservation, church or other organization.